Pressure Cooker is a 2020 Indian Telugu-language comedy drama film directed by Sujoi Karampuri and Sushil Karampuri. Sai Ronak as a debut solo lead actor and Preethi Asrani are in the lead roles. The film was released on 21 February 2020.

This is a new age family drama entertainer. The story is about a young graduate under pressure from his father who expects him to go and “settle” in USA to be seen as successful. 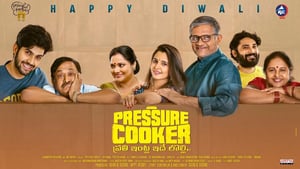