Janaadhipan (transl. The king) is an Indian Malayalam-language political thriller film written and directed by Thanseer M A, and starring Hareesh Peradi, Vinu Mohan and Anil Nedumangad. The soundtrack is composed by Mejo Joseph. The film began production in January 2018.

Based on the life of a Chief Minister in Kerala who was pitted against an invisible foe and how everyone involved was scheming ruthlessly for their own personal gain. 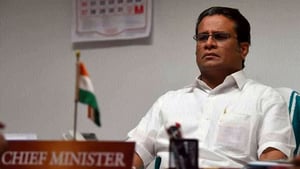